'Gates’ is the story of two estranged sisters, and the multifaceted, often messy nature of sibling relationships. Lily Walbeoffe and Iona Champain play sisters Ella and Grace, in a beautifully shot and excellently acted short film.

I am particularly interested in the representation of female relationships in film, and raw portrayals of sisterhood. Walbeoffe and Champain lived together for four days prior to shooting, and their onscreen chemistry is totally believable. “We lived and breathed as sisters”, Lily explained. Sibling relationships are difficult to recreate on-screen, for risk of seeming contrived or melodramatic, but the dialogue is almost entirely improvised, which enhances the film’s naturalistic tone. In its 40 minute run-time, 'Gates' explores sibling relationships more effectively than many feature length films I have seen.

Lily Walbeoffe described the frequent “cookie cutter” one dimensional depiction of women on-screen, and how both she and Iona wanted to explore more accurate representations. It is always refreshing to see flawed female characters, and neither Grace nor Ella is entirely likeable throughout the film. Grace can be impatient, and Ella immature, but they also display moments of loving tenderness towards each other. We witness their shared moments of sisterly companionship, as they pick blackberries, merrily swig from a vodka bottle, and lie on the grass playing “would you rather” (a frequently enjoyed pastime with my own sister).

The film’s beautiful cinematography captures the stunningly vibrant colours of the Kent countryside, across which our protagonists journey. A serene soundtrack featuring songs by Nick Mulvey and Nicole Reynolds beautifully accompanies shots of nature’s quiet tranquillity.

Lily told me that the film was heavily inspired by the work of the Duplass brothers and Andrea Arnold, both of whom value an “un-Hollywood” style of improvised dialogue and naturalistic environments. I liked that the film does not present us with a detailed backstory, but instead priorities character study over narrative. As the film progresses, the viewer gains a little context into Grace and Ella’s situation, while leaving the rest to our imagination.

Minimal dialogue is powerful, and some of the film’s most impactful moments are created through merely a shared glance. There is a particularly moving moment where Grace tells Ella her future career plans, and the silent admiration for her big sister is so perfectly encapsulated by Ella’s understated yet powerful expression.

Writer and director Josh Pickup’s previous film ‘This is ME’ (in which Walbeoffe also stars), received critical acclaim for its depiction of invisible disabilities. As a disabled filmmaker himself, he is an advocate for the community. ‘Gates’ reflects a hopeful prospect for greater representation in the film industry, and I look forward to seeing his future work.

The film begins with a nightmare. Our 16-year-old protagonist, Vivian (Hadley Robinson) is running through the woods at night. There are rustles in the trees around her and an ominous sense of dread. She opens her mouth to scream, but no sound comes out. This is ultimately the central premise of the film: a young woman finding her voice, and ultimately a collective female voice, out of a silenced scream. Cut to present day, where the annual high school "rankings" have just been announced, categorising the girls into labels which include “best rack” and “most bangable”. Detestable football jock, Mitchell (Patrick Swarzenegger) personifies this day-to-day objectification that pervades the daily lives of the school’s young women. When he begins to bother new girl Lucy (Alycia Pascual-Peña), Vivian tries to reassure her by telling her to just keep her head down, to which Lucy corrects her: “I’m gonna keep my head up... high." After being ranked “most obedient”, and disco
Read more

The Assistant exposes the chilling complicity of workplace culture 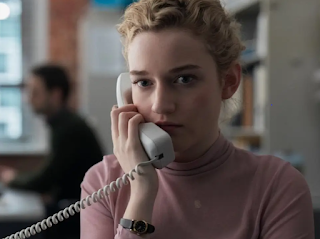 My essay on 'The Assistant' can be found at The Gallyry: https://www.thegallyry.com/post/the-assistant-exposes-the-chilling-complicity-of-workplace-culture
Read more